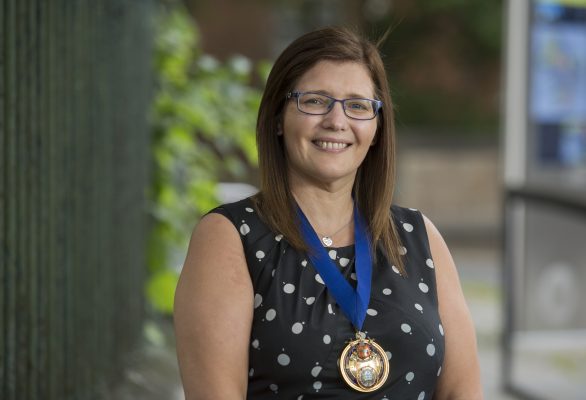 Joanne Marriott, Commercial Manager at Nottingham based independent insurance broker, Russell Scanlan, has been appointed as President of Nottingham Insurance Institute – the first person from the company to take on the role.

The long-established firm, which is based in Wellington Circus in Nottingham City Centre, has a historic partnership with the Nottingham Insurance Institute, with many of its employees on the council throughout the years.

Now, after 19 years of being a part of the Institute, during which time she enjoyed the roles of Dinner Secretary, Treasurer and Deputy President, Joanne is taking on the role of President for the next 12 months. She joins other industry professionals who voluntarily give up their time to offer a range of key benefits to CII members in the local area.

Joanne joined Russell Scanlan in October 2020, and in her role as Commercial Manager she works alongside the management team to oversee the commercial and SME service departments of the business.

On being elected to the position, she said: “I am very honoured to have been chosen for the role, having been part of the Institute for almost 20 years, I’ve had the pleasure of working with some inspirational past presidents, so there are certainly some big shoes for me to fill! Nonetheless, I’m excited for the challenge ahead and I know I have the support of the council every step of the way.”

During her presidency, Joanne and the council will be offering career guidance, mentoring, and training courses for those operating in the local insurance industry, as well as organising networking activities and community engagement initiatives.

Over the past year, the Institute has had to quickly adapt to adhere to Covid-19 restrictions, with the entire event programme delivered online for the first time.

Joanne said: “When I accepted the role as the future president, little did I know that I would be taking on the mantel in a virtual world. The pandemic has presented many challenges to the Institute over the past year, but with the hard work and dedication of our council members, we have learnt new ways to communicate and continue to provide a full, varied and successful CPD programme. We look forward to meeting face-to-face with our members again once Covid-19 restrictions allow, as well as continuing to utilise the infrastructure we now have in place to introduce both in-person and virtual meetings.”

Joanne said during her presidency she aims to introduce new ways to raise money for insurance charities after a year of many fund-raising events being cancelled. Following in the footsteps of her great, great grandmother Alice Hawkins, a leading East Midlands suffragette, Joanne also intends to ‘celebrate women in the industry’ by working alongside inspirational women in the local area.

Sales and Marketing Director, Mike Dickinson adds: “We are so proud of Joanne for taking on this new adventure and flying the flag for the Russell Scanlan team. She has years of experience in the industry and a strong willingness to help others, we know she will make a real difference during her time as president. We look forward to supporting her each step of the way.”

Founded in 1881, Russell Scanlan celebrates its 140th birthday this year.